Hoppa till innehåll
Hem » About SDHF 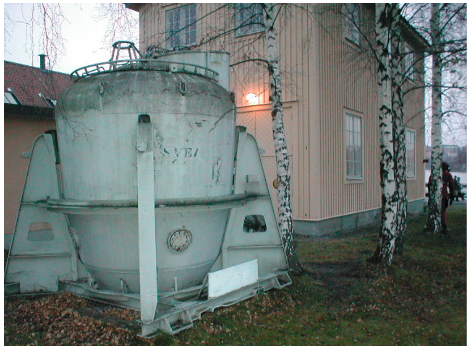 SVENSK DYKERIHISTORISK FÖRENING; that is the official name in Swedish of the Swedish Diving Historical Society. Since June 2002 SDHF is one of the affiliates of the HDS. The society dates back to 1979 and was born as a result of, shall we call it, an “emergency situation”. The Swedish Navy had just moved their experimental diving facility to the new building at Hårsfjärden, and the abandoned building at Djurgården in the centre of Stockholm was scheduled for wrecking. Some attempts had been made to save the main chamber for use elsewhere, i.e. to support the growing sport diving in western Sweden, but nothing substantial had resulted.

A rescue operation was organised based on a call signed by several VIPs in the diving community. Among the names were Anders Franzen, the historian who initiated the salvage Vasa, Per Edvin Fälting, the diving supervisor at the Vasa rescue operation, Carl Magnus Hesser, professor in diving medicine at Karolinska Institutet and many others. The newspapers spread the message and Svensk Dykerihistorisk Förening was born on May 23rd 1979. The main purpose of the society was to create an understanding for the value and potential of a building in central Stockholm in which diving history could be displayed. The real advantage was that this was not just any building, but the building in which Arne Zetterstrom, the first man to use hydrogen-oxygen mixes in deep offshore diving and other pioneers in modern diving had worked. It was also a building in which the first electro-welded pressure chamber from 1934 was housed. The society was given two years to show that the idea of a diving historical museum in Stockholm was good enough to get further support. The building was located in the area where it was planned that the new Vasa museum would be built. However, a problem occurred as some influential people considered the same area to be ideal for recreation and games and a huge lawn was planned. 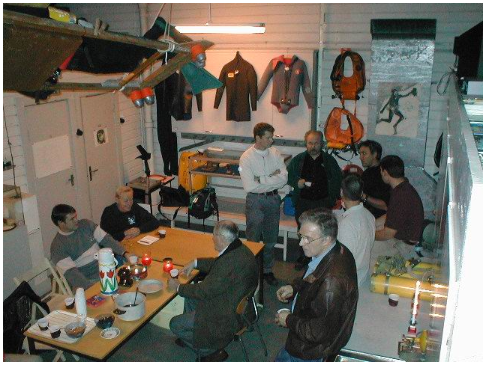 Today the members of the society take turns as guides at the museum that has become a part of Swedish National Maritime and Transport Museums. The goal is to keep the museum open during weekends in the summer and offer guided tours to groups of interested, mainly sports- and professional divers, for the rest of the year. 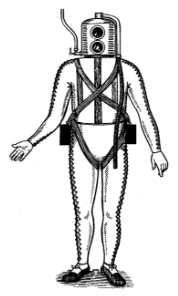 The 2 ½ storey building is centred around the 6 m escape training tank and the vertical compression chamber used for wet dives to a maximum of 100 meters. In addition to these built-in objects, the house is now filled with equipment from professional and recreational diving from over the last 50 years. One of the latest additions to the collections is a helmet of the Fahnehjelm equipment that has become the society logo. A.L. Fahnehjelm, a Swedish naval architect, designed this hardhat equipment and drysuit in 1839. If anyone finds Fahnehjelm equipment or something similar somewhere in the world we would be happy to hear about it. 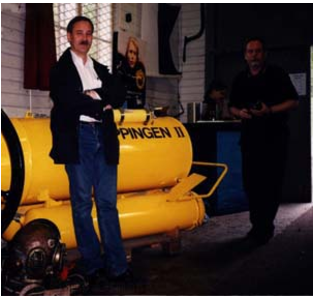 Among the more recent objects that we are proud of is a yellow mini submarine, built in the late 60’s by Håkan Lans the entrepreneur and inventor of the computer mouse, computer colour graphics and a GPS based navigation system. To the left Håkan Lans is standing in front of his minisubmarine “Doppingen”.

Another rare object is a water jet propelled ROV from the 50’s, built for the Swedish navy. The ROV was designed for a mine clearance project, however it was not too successful as ultrasound pingers and navigation aids were not common at this time, so there was continuous uncertainty regarding where the ROV was after it was launched. The ROV needs to be restored before it can be displayed, but we hope this will happen in a near future. 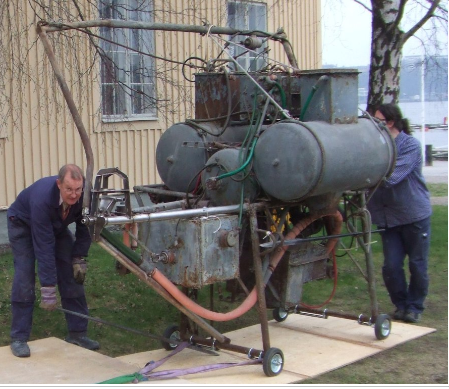 To the left is Hans Ornhagen talking to Rolf Jansson, a mine clearance diver in the early fifties and the donor of the 1950 Aga “Iron bed” scuba hanging on the wall behind. 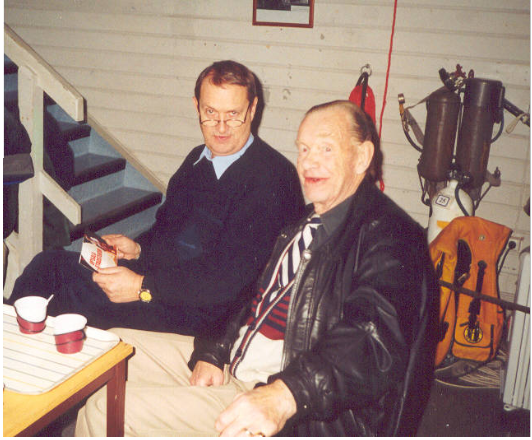 The entry and some of the valuable items in the museum. The mini-submarine Doppingen, a 2-cylinder and in the lower left corner a 1-cylinder pump. 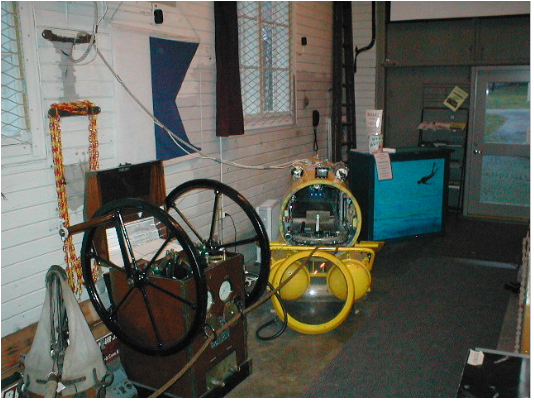 To the left a Swedish Carlsson and to the right a Siebe Gorman helmet including suits on display beside the lower part of the escape training tank. 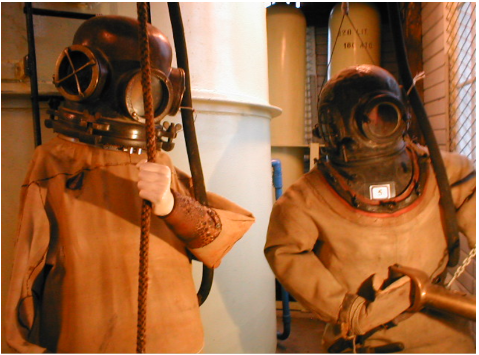 Whenever you are in Stockholm please contact us via info@sdhf.se We will do our best to find someone to show you our “Dykankhus”. You can also follow our activities via www.sdhf.se If you look at a recent tourist map of Stockholm you will find the “Dyktankhuset”.