This year’s theme ”People’s recruitment and work – a journey in industrial and technological history”, was as cut and cut for SDHF.

Unfortunately, we were told a few days before that Djurgården would be more or less isolated on this day, when a big cycling competition would take place.

The protests became numerous and at the last moment a little change in suspension, but then the damage had already happened.

This made the number of visitors likely to be significantly less than usual.

The dive tank house was kept open and we also offered lectures on three occasions during the day with the headline ”From the diver at Vaasa 1666 to the saturation diver in the North Sea 2015”.

An exciting and interesting account of different aspects of diving past and present, which Hans Örnhagen gave us.

Many people stayed after the lecture and asked questions and even those who ”thought they could do most” admitted that they learned a lot of new things.
We had also had the chance to show the true contrast to
The Dive Tank House collections with old equipment by SVENTAB (Stockholm Vattenentreprenader AB) set up three containers with their most modern equipment, where you could see how modern underwater work goes.

A fantastic opportunity to compare before and now.
As a thank you for this effort, the Board decided to offer a gold sponsorship for 2016.
Birgitta 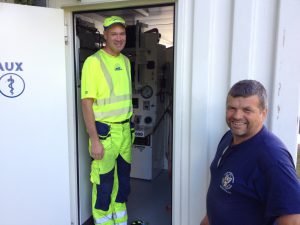 ”People’s recruitment and work – A Journey into Industrial and Technological History” is illuminated by an exhibition of divers’ costumes
costumes, breathing apparatus and tools.

Tickets are collected at the Dive Tank House entrance.
Maximum 25 audience per lecture.