(A good source in creating this chronology has been SPUMS Journal Volume 29 No.2 June 1999. Spums Archive

If you have the rights to any of the images used to illustrate the material, please contact us through our contact form >, we will give you credit for the image, or remove it if you wish.)

In the 19th century, an officer in the Austrian naval artillery got the idea to use a small boat loaded with explosives, propelled by a steam or air engine and controlled by cables to be used against enemy ships. After his death, his notes came around the idea in the possession of Captain Giovanni Luppi.

Luppis built two prototypes, the second of which was presented to the Marine Commission in the presence of King Joseph I. The Commission did not accept it without better progress and control.

In 1864, Luppis was introduced to the British mechanical engineer Robert Whitehead, head of the local factory ”Stabilimento Tecnico Fiumano”, with whom he signed a contract to further develop ”salvacoste”.

Whitehead changed the designs considerably and began to think about the problem of launching explosive charges at a distance below a ship’s waterline, which was much more effective than bombing over the water’s surface. Whitehead then manufactured a device that ran underwater and installed an engine that was powered by compressed air, as well as automatic depth and direction control.

On December 21, 1866, the first self-propelled torpedo, now called the Minenschiff, was officially demonstrated for what was now the Austria-Hungarian Empire for evaluation. This model was 355 mm in diameter and 3.35 m long and weighed 136 kg with 8 kg of explosives. The Marine Commission accepted it and then on March 6, 1867, the government contracted the inventors for a test production and agreed to pay all production costs. However, there where not as many orders as desired and Luppis, which was responsible for the production, was forced into bankruptcy in 1873, after which Whitehead starts Torpedo-Fabrik von Robert Whitehead and takes over the entire business.

Luppis is compensated in a way, when he is ennobled by Franz Josef in 1869 and given the title Baron von Rammer (the sinker).

Much later he is honored to also be recognized as the first to develop an ROV 40 .

Here it may be appropriate to define the difference between ROV and AUV, which are both a kind of robotic submarine. ROV, Remotely Operated vehicle, is a cable-operated, remote-controlled unit whose operator is on land or on board a ship. An Autonomous Underwater Vehicle, AUV, is an unmanned underwater vehicle that performs its mission without the intervention of any operator. The AUV is pre-programmed to, once the task is completed, return to a location where it can be recorded or downloaded of data 41 .

Oskar Sandahl became surgery master at the Karolinska Institute in 1854.

Sandahl was sick and made, among other things to cure his health, several trips abroad with his family (wife and two daughters. When that time came, the daughters were taught at home. One of the teachers was the young August Strindberg).

During 1857–1858, Oskar Sandahl made a trip, now together with Otto Christian Lovén, assistant professor at the Karolinska Institute, to Egypt. This trip had a clear scientific purpose. Visits were made at pharmacies, at drug wholesalers and drug collectors. During the trip from Egypt, Sandahl in Montpellier in southern France had studied a facility for treating breast-sick patients with “ in air bath” – in a pressure chamber.

He then built such a facility – the medico-pneumatic facility at Klara Strandgata in Stockholm.

The vessel on the right is a cooler of the hot air from the compressor. The chamber was 1 m in diameter and was approximately 2 m high.

In October 1860, this institution, popularly called Sandahl’s bells, began to receive patients. A ”bath” in the pressure chamber took between one and two hours. The air pressure was gently raised for 20-30 minutes after which it was just as slowly lowered at the end of the bath. All kinds of respiratory problems, bronchitis, asthma, whooping cough, tuberculosis and more, were treated. During the first years, approximately 2,700 treatments were given, of which Sandahl described 272 in his later dissertation.
Although the institution received state grants from 1863, it went on a loss and when the state grant ceased in 1873 it had to close.

His dissertation ”On the effects of densified air on the human organism”, Sandahl defended in 1862 and was promoted in Lund to the doctor of medicine in 1863 38, 39 .

The first snorkel known to be patented in 1863 in the United States by Scholfield. However, it was not intended for diving but for use in swimming lessons40. It was also not called snorkel.

In 1860 the Frenchman Rouquayrol patented a demand valve intended for smoke diving, but when in 1864 he began to cooperate with Navy Lieutenant Denayrouze, they developed it instead to underwater use. The couple also designed a hand-powered air pump, a copper mask and a diving helmet 41 .

(As a curiosity, Jules Verne in the book ”A World Sailing Under the Sea” refers to Rouquayrol and Denayrouze demand valve.) 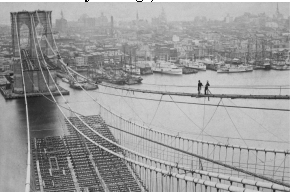 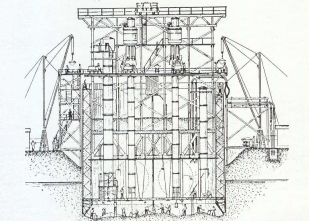 The Brooklyn Bridge construction project is being started. 600 people was employed for caisson work. Note the men with shovels on the lower image who are digging out the bottom sediment so that the casoon can descend to rock or solid sand. The caissons that were up to 23, 8 meters high were heated with steam as it was thought that pressure sickness was caused by, among other things, extreme cold. On-site physician Andrew Smith reported 110 of 119 cases of comorbidities as serious. Fourteen of those affected died. Decompression tables or recompression were not used. Smith was the first to call the symptoms a case of caisson sickness. Among the public, the disease was called ”doing the bends” because of the posture the affected often took. Later it was shortened to bends. An early treatment method for pressure drop sickness, which was long believed to be effective, was that the affected drinker/smeared with alcohol at the affected place. The therapy was ineffective since there were other causes than just blood flow that had significance 42, 43.

L von Bremen developed a speech tube. This tube was connected to the diving helmet. This led to a clearly improved communication between the diver and the people on the surface 44 . 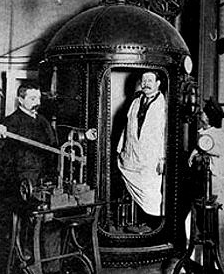 A distinctive feature of the Carmagnolle suit was the helmet. It had 25 individual two-inch glass windows at intervals of the average distance for the human eyes. An additional windowat the top of the helmet could be removed to ventilate the suit in surface position.

The joints were made of partial sections of concentric spheres shaped to create a close fit and were intended to be kept watertight with a loop of waterproof fabric attached to both sections of the joint and folded to slide on itself as the joint was moved. The suit had no less than 22 such rolling joints; four in each leg, six in each arm and two in the body part of the suit. The suit was extremely heavy and never turned out to work really satisfactorily. The Carmagnolle costume is now on display at the National Maritime Museum in Paris 46.

Henry Albert Fluss, employed as a master diver at Siebe, was granted a patent in 1878 that improved the operation time of diving equipment. His apparatus, a breathing apparatus, consisted of a rubber mask connected to a breathing bag, with (estimated) 50-60% oxygen, supplied from a copper tank also containing carbon dioxide purified by rope yarn soaked in a solution of caustic potassium, giving the system duration of about three hours. Fleuss tested his unit in 1879 by spending an hour immersed in a water tank, then, a week later, diving to a depth of 5.5 m in open water, at which point he was easily injured when his assistants suddenly pulled him to the surface. Fleuss appliances were used under operating conditions for the first time in November 1880 47 .

About 1880, Carl Axel Lindqvist, based at Mäster Samuelsgatan 50 in Klarakvarteren in Stockholm, began to build various helmets. It is believed that he was inspired by the design of the Fahnehjelm helmet Just as the Fahnehjelm helmet had the helmets that Lindqvist built no chest plate, instead he used a brass ring that was permanently attached to the suit. The ring was screwed to the helmet with 4 bolts. Lindqvist’s business was taken over by Emil Carlsson in 1910. Carlsson continued to manufacture helmets of the same ”pot” design for another 42 years, but in 1940 a catalogue was published in which helmets with a 12-bolt chest plate were also displayed 48 .

Additional safety devices were added to diving helmets. These included;

– a valve that regulates the amount of air in the helmet / suit.

– a ”nick valve” that allowed the diver to release

air from the helmet which gave some control over the buoyancy.

– a check valve that prevented air from entering the back of the air hose, if it should disengage or loosen at a point shallower than the diver.

Please note that many of the references are to Swedish pages or books.